As an only child, his infancy up to his tenth birthday was spent among comics and solitary games.

Little Roco lived in a home without an identity: his father mostly absent and mysterious; his mother bothering little about the child. His father, of whom Roco doesn´t even know by name, is rumored to be a member of the secret order of the Stellar Knights according to the pseudoscientific literati of the metropolis.  This sect, whose intentions are unknown beyond the monetary ones, has let the rumor spread that they have secret technology to reach the stars.   Prewar fantasies flourished during a period given to idle speculation.  Such fantasies inflamed the young boy´s imagination and constituted, almost exclusively, his emotional up-bringing. Roco´s mother, Alisia Mistral, dedicated to taking advantage of this ludicrous system established in the metropolis in the years previous to the Great Interplanetary War, the long conflict of `53, leaving the child over long periods of time in the care of neighbors, who were uninterested in childcare and his needs.

When Mercury invades Earth and destroys Mundípolis in September of 1953, Roco, believing – or fantasizing – that his mother was dead, abandons his home in ruins and wanders for weeks around the city in flames, lost in an apocalypse which produces in him more curiosity than fear.

Every afternoon, they gather in the only building left standing downtown, the Planetarium of Mundiatomium, in the Astrophysics Center, to keep safe through the night.

It is there we find the famed scientist Pierre Covalsky on the night of the final offensive against the capital. At the moment that an explosion definitively destroys the scientific complex, Covalsky miraculously escapes there with the boy in his arms, unconscious due to a head injury. The scientists take Roco with him to his hidden refuge in the mountains, far from any contact with the war and society. (This episode and the successive adventures are found narrated in the book La Estrella Lejana (The Distant Star).

This is how Roco came to live in Camelot, the Covalsky residence and the Terrace Mountains.  He´s ten years old and for the first time in his short life the child finds a family.  The marriage formed by Ana and Pierre Covalsky, till then without children, happily take in this sullen yet intelligent boy the war had given them and where the tenderness he receives wins him over and, within a short time, brings him back to life. They are the “golden years” as Roco remembers much later in 1985. (See “La Estrella Lejana” p. 7) While the war rages on far from the solitary mountains – seemingly in another dimension, Pierre and Ana, both physicists and engineers, teach the boy everything he should and wants to know, being that Roco is keen on all knowledge which, in his prior bad education, had been denied him.

Still, the most remarkable feat of his training happens when Pierre lets the boy, only twelve years old, fly solo in one of the prototypes constructed in the workshops in Camelot. As an adult, Roco would remember, ”It was like I myself was flying and the rocket embraced my body, gentile and obedient”. To the amazement of them both, Peter would comment to his wife, “Roco is a genius navigator. Only those who have Space in their blood can do what he does with a ship at his age”.

In1956 Jill Covalsky is born in Camelot. The family grew as the world outside remained embroiled in war; the end of which they learned from two peculiar combatants that fell from the sky in a crippled ship. They are none-other than Chico Panamá and Saxxon who are sick and tired of the war and decide to stay in the mountains, accepting the hospitality of the Covalsky. 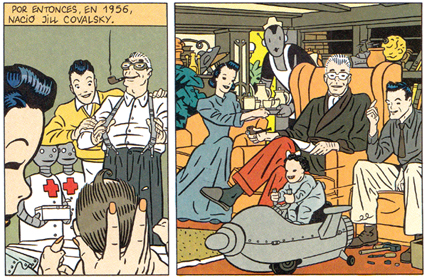 In 1958, with the capitulation of Mercury, the post war period begins, a period of reconstruction and optimism for all the SS.  Fresh airs of renovation were blowing throughout the worlds (in 1959 the SOP or Solar Organization of Planets was formed as the germ for the projected solar federation) the small grand family of Camelot comes out of its voluntary isolation in the Terrace Mountains to demonstrate to the various public and private organizations of Sol, keen on technological advancements, the aerospace engineering feats achieved in this hidden stronghold in the mountains by the Covalsky.

So the three boys, Roco, Saxxon and Chico who, by the hand of Pierre and Ana are converted into consummate physicists and engineers and become famous throughout the solar system for their repeated series of exploits achieved in very little time.  They are named the Sidereal Boys. In the span of five years there was nowhere, even in the most far-flung obscure corner of the planets and satellites where they hadn´t demonstrated their worth and what, under the guidance of the Covalsky, were able to achieve.

In 1963, (Roco is 20 years old), they join Project Prometheus to obtain an ionic propulsion motor utilizing propaxol, a high potency, unstable Venusian gas.  There in the artificial asteroid which orbits Jupiter, they construct the Star, the first ship with a propaxol-based motor.  Piloted by Roco, it can reach speeds of up to 4,000 Km/sec., inaugurating the era of Fast Space.  El SS had become, in a single day – “the day the Star flew”-, much smaller.  A great wave of optimism and belief in the supremacy of science sweeps over the worlds which permits them to look beyond the solar system and dream.

That very same day, however, the tragedy of Prometheus occurred, as shameful evidence of the greed of the planetary governments, the dark side of the generous cooperation, who would always oppose the common good.  On that fateful day Ana Covalsky dies, Saxxon disappears and Roco ends up blaming himself for what´s happened and fleeing Camelot with “The Distant Star”, the secret prototype that Pierre Covalsky had hidden there. 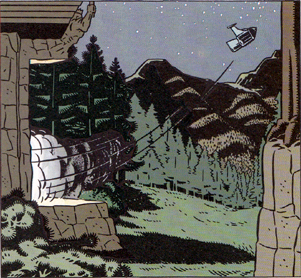 Roco Vargas, having been thrown out of Paradise, would pass the next ten years submerged in chaos, one step from self-destruction and self-denial.  Embarked on dangerous and sometimes illicit adventures, alternating with the worst of species in the SS, living life on the edge, Roco would sojourn to the far-flung limits of all know frontiers until he loses his own name.

By 1973, at thirty years of age, fed up with such a prolonged suicide, he converts into Armando Minstral and retires to Montebahía, Earth, where he inaugurates his night club and pretends to spend the rest of his days writing pulp space fiction.

It won´t be until 1982 that Pierre and Jill Covalsky, Chico Panamá and Saxxon are reunited to remember their past (See “Triton”) and redeem his name.