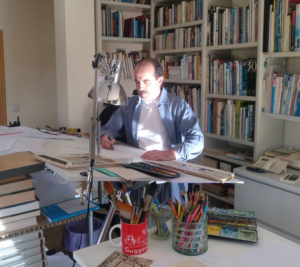 Shortly thereafter, he would be invited to form part of the magazine El Víbora with the adventures of Claudio Clueco, where he would explore the ”noir” genre, refining his own works through its key components. Asesinato en 24 imágenes por segundo (Assassination in 24 images per second), the first adventure of his character, distilled from Dashiell Hammett as the underground American, initiated a concept that would carry through to El ángel caído (The fallen angel), his first long adventure that would attract interest of French publishers like the prestigious Futuropolis, where it was included in their catalogue at the beginning of the 80s.

In 1982, Torres would be featured in the pages of the recently inaugurated publication Cairo, with Opium, a character that exhumes as much of Sax Rohmer´s Fu Manchú as he does pop culture, and whose adventures begin to trace the Clear Lines style, which he would exploit the following year in Tritón, the first presentation of The Sidereal Adventures of Roco Vargas. A “space opera”, initially developed in four consecutive tomes, which demonstrates the constant evolution of the artist. El misterio de Susurro (The mystery of whisper), Saxxon and, most importantly, La Estrella Lejana (The Distant Star) integrated the author´s cycles of artistic maturity completed in the series in 1987 with this album, now considered a classic of Spanish comic illustrations.

During this same period, Torres had completed the album Sabotage! for Magic Strip and had commenced a successful career as an illustrator for various publishers in the United States (Penguin Books, Bantam, Dell, Playboy, Premier Magazine, New York Weekly, Time, Sports Illustrated, Random House, Rolling Stone, L.A. Times, DC Comics, etc.), as well as for businesses and institutions in his native Spain.

In the 90s a new series began, El octavo día (The eighth day), where the author develops his concept of a short story; the clash between reality and fiction. Simultaneously, he begins to create short stories for the American market (with some scripts provided by Allan Moore) and, to not abandon his home market, produces Te Veo IVAM for the Valencia Museum of Modern Art. In 1995 he would create another key character in his trajectory: the dinosaur Tom, protagonist in four illustrated books and two compilations in comic books, to date. Moreover, in collaboration with the E.B.U. (the European Broadcasting Union) he has produced more than thirty episodes of cartoon featured animations under the title of Las adventuras de Tom (The Adventures of Tom).

At the end of the 90s, he initiates a new science fiction series called El ángel de Notre Dame (The Angel of Notre Dame).

To inaugurate the XXI century, Torres brings back his most famous creation, Roco Vargas, in four new installments along with illustration work and the television premier of the animated version of Tom, the dinosaur. In 2009 he would publish his first graphic novel: Burbujas.

Presently, Daniel Torres is working on various projects and works as an author, illustrator and painter.

From 2008 to 2014 he created the book La Casa, crónica de una conquista (The house, cronicles of a conquest), published in 2015, a work representing an exhaustive exploration of the capacity of the graphic narrative as a complete and modern form of communication.

In the year 2016, Daniel Torres published the latest book of the saga of Roco to date: Jupiter.

In 2018 his most recently completed work Picasso en la Guerra Civil is published.

At present (commencing in 2019), he is in the process of completing EFQNF or El Futuro Que No Fue (The future that never was), and an adventure featuring Archi Cúper, the private detective who had appeared earlier in the album of Roco Vargas, El misterio de Susurro, as well as embarking on the realization of a trilogy dedicated to Roco Vargas in his early years.